The Legislative Power of the Republic is exercised by the House of Representatives in all matters.

The current electoral law provides for a simple proportional representation system. The number of seats in each constituency is determined by law with constituencies coinciding with administrative districts. Seat allocation for the Greek Cypriot community is as on the table on the right. Each voter can choose a party or an independent candidate, without having the option of selecting candidates from different parties. Seats are distributed according to the electoral strength of each party. 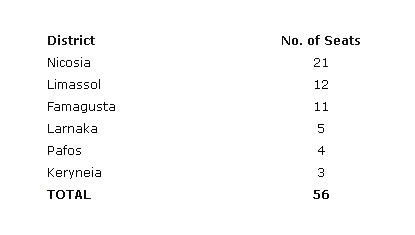 Procedures of the House - Ordinary sessions run from the beginning of September to July the following year. The House is in quorum when at least one- third of the total number of its members is present. The laws and the decisions of the House are passed by simple majority vote of the deputies present.

Parliamentary Committees - The Parliamentary Committees generally correspond to the Ministries of the Government. They have the right to summon any interested party, authority, organization, society, association, trade union, person or corporate body to give information and evidence or to express and explain an opinion or view on any bill or subject under consideration. The decisions of committees are taken by majority. 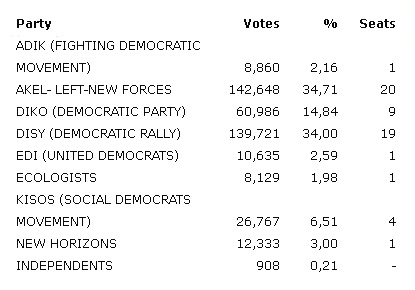 The new Members of the House elected in June 2001 the General Secretary of AKEL Mr. Demetris Christofias as President of the House of Representatives.

President of the House of Representatives - Demetris Christofias was born in Dikomo, Keryneia, which is now in the area occupied by Turkish troops, on 29 August 1946. At the age of fourteen he became a member of the Pan Cyprian United Student Organization (P.E.O.M.) and in 1964 he became a member of the Progressive Party of the Working People (A.K.E.L.), of the Pan Cyprian Labor Federation (P.E.O.) and of the United Democratic Youth Organization (E.D.O.N.). In 1969, at the 5th Congress of E.D.O.N., he was elected member of the Central Council. From 1969 to 1974 he studied at the Institute of Social Sciences and the Academy of Social Sciences in Moscow (Doctor of Philosophy in History).

On 22 April 1988 the plenum of the Central Committee elected him to the post of the General Secretary of the party’s Central Committee, a post to which he was re-elected three more times (1990, 1996 and 2000). At the parliamentary elections on 19 May 1991 he was elected Member of the House of Representatives standing as an A.K.E.L. - Left - New Forces party candidate in the Keryneia constituency, an office to which he was re-elected at the subsequent parliamentary elections on 26 May 1996 and 27 May 2001.On 7 June 2001 he was elected President of the House of Representatives for the Eighth Term of Office.

He is chairman ex officio of the Standing Parliamentary Committee on Selection. He is also president of the executive committees of the Cyprus groups to the Inter-Parliamentary Union (I-P.U.) and to the Commonwealth Parliamentary Association (C.P.A.). He is married and has two daughters and a son.