The Army of the Republic of Cyprus was founded immediately after the Declaration of Independence. It consisted of 2000 men, 60% of whom were Greek Cypriots and 40% Turkish Cypriots. National service was not mandatory and could be imposed with the mutual agreement of the President (Greek Cypriot) and the Vice-President (Turkish Cypriot) of the Republic. After the intercommunal events of December 1963-64, the Turkish Cypriots departed from the official Army of the Republic. At the same time and because of the threats of Turkey to take military action, the High Military Command for the Defense of Cyprus was created and a Greek Division was transferred to Cyprus. This Division operated on the island up to the end of 1967, when it was removed from Cyprus. In 1963, the Special Joint Staff of Cyprus was also established, and later was renamed into National Guard General Staff in 1964 after the establishment of the National Guard.

The organizational structure of the National Guard, under legal semi-military form, included:

Between 15 June 1964 and 2 August 1965, on the basis of the National Guard Law, a successive obligatory drafting of conscripts of the 1959-65 classes took place, resulting to the gradual development of the National Guard and the enlistment of about 17000 men. Since 1974 and up to the present, the National Guard, using modern technological advancements and staffed by well trained officers, graduates of Military Schools in Greece and other countries, has evolved into a considerable and battle-worthy deterrent force, with a high degree of training, operational readiness and fighting capability, comparable to those of European Armies. Beyond its specific military duties, the National Guard contributes to other activities and carries out social work, such as the assistance in fire-fighting, dealing with natural disasters and voluntary blood donation, while at the same time contributes towards the shaping and molding of the characters of the country's youth, during their military service.

National Guard Emblem - The Two-headed Eagle was established as the emblem of the National Guard since its founding in 1964. It symbolizes the ecumenical character of the Greek spirit. The two-headed eagle was a mystical symbol of Hellenism since the ancient times. In ancient mythology, it was the par-excellence godly and heavenly bird, helper and protector of Zeus. It was first used as a symbol of power during the Byzantine years. It symbolized the dual sovereignty of the Byzantine Emperors in Europe and Asia.

With its two heads looking proudly to the left and to the right, they wanted to indicate that the central power had its Reserve and Replenishment Units. Between 15 June 1964 and 2 August 1965, on the basis of the National Guard Law, a successive obligatory drafting of conscripts of the 1959-65 classes took place, resulting to the gradual development of the National Guard and the enlistment of about 17000 men. Since 1974 and up to the present, the National Guard, using modern technological advancements and staffed by well trained officers, graduates of Military Schools in Greece and other countries, has evolved into a considerable and battle-worthy deterrent force, with a high degree of training, operational readiness and fighting capability, comparable to those of European Armies. Beyond its specific military duties, the National Guard contributes to other activities and carries out social work, such as the assistance in fire-fighting, dealing with natural disasters and voluntary blood donation, while at the same time contributes towards the shaping and molding of the characters of the country's youth, during their military service attention equally focused towards the two worlds, east and west. As a Christian symbol, it is the official emblem of the Patriarchates throughout the Orthodox world.

Enlistment Obligations - According to the National Guard Law, all male citizens of the Republic of Cyprus on the completion of their 18th year of age, as of the first of January of each year, and up to the age of 50, are under obligation to carry out national service.

Duration of National Service - In 2003, by a decision of the Council of Ministers, national service was reduced from 26 to 25 months.

Exemptions - All those included in the following categories are exempted from national service:

or the Service of Prisons of the Republic.

Enlistment Benefits - The military duty is reduced to 13 months in the following cases:

The duration of service is reduced by 4 months for conscripts of whom one of their parents is not alive.

Family Circumstances - The duration of service is reduced by 13 months for the following persons:

Enlistment of Conscripts - The enlistment of conscripts is initiated by a decision of the Council of Ministers and is implemented in two intakes in the months of January and July of each year.

Leave of Absence - During national service, the conscript is entitled to regular leave and sick-leave, as detailed on the table below. 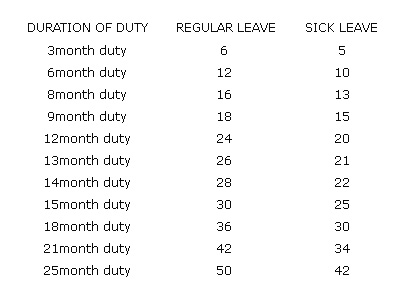 Discharge Due to Special Circumstances - The Minister of Defense has the power to discharge conscripts, by age-group or part thereof, by region or category, or in special cases, person by person, following their application, for reasons of special circumstances (such as family, social and economic reasons).

Participation of Women in the National Guard - Women Officers and Non-Commissioned Officers (NCOs) serve in the National Guard. Officers are either graduates of High Military Educational Institutions in Greece or directly appointed by the Council of Ministers. NCOs can be distinguished into career and volunteer personnel. Career NCOs are either graduates of Military Schools of Non-Commissioned Officers in Greece or come from volunteer NCOs who are given permanent status after serving in the National Guard for at least six years. Women can enroll in all Schools and Faculties of Military Academies and colleges without any limits in the number of positions. The enlistment of women in the National Guard on a voluntary basis as NCOs began in 1990 and has continued up to the present time with great success. Their appointment takes place on contractual basis with an initial duration of three years, which can be renewed for subsequent three-year periods, provided this renewal is justified by the current needs.

Participation in International Organizations - United Nations - The Ministry of Foreign Affairs and the Ministry of Defense have decided a symbolic attendance of Cyprus in peace-keeping missions of the UN, by assigning two officers of the National Guard as representatives to the UN Stand-by Arrangements System (UNSAS) as staff officers and observers.

OSCE - The Republic of Cyprus is a founding member of the Organization for Security and Cooperation in Europe (OSCE), from the date of its founding (1975).

The obligations of Cyprus arising from the OSCE documents are the following:

In the recent years, the Republic of Cyprus is actively involved in the OSCE, implementing an extravert policy and giving exposure to the National Guard. Thus, it fulfils its obligations towards the organization, including the submission of information within the deadlines and the active participation in military activities, conferences and seminars. The Republic of Cyprus has appointed an officer in the Permanent Delegation of the Republic in Vienna in order to follow all matters regarding the OSCE.

European Union - The Republic of Cyprus declared its contribution to the EU capabilities on 21 November 2000, in Brussels, during the Defense Ministers informal meeting. The contribution of the Republic of Cyprus consists of a General Transport Company of 174 persons, one UAV system, the Air and Sea Surveillance System, the Search and Rescue Service, as well as facilities on the territory of Cyprus, such as ports, airports, hospitals, military facilities and target ranges.

The Republic of Cyprus is represented in the Military Committee (EUMC) composed of the Chiefs of Defense of member-states, by the Chief of National Guard. Furthermore, a high-ranking officer has been appointed to the Permanent Delegation of the Republic of Cyprus in Brussels, who acts as the military representative (milrep) of the Chief of National Guard in the regular meetings of the Military Committee, in addition to his other duties. Cyprus has been given a position in the European Military Staff, which is in the process of being filled. At the same time, Cyprus participates in 5 of the 19 ECAP Project Groups, which deal with issues of covering the deficiencies of the European Military Capabilities.

Western-European Union - In January 1998 Cyprus submitted its application to join the WEU as an associate partner.

Open Skies Treaty - The Open Skies Treaty was signed in March 1992, by 25 OSCE member-states, not including Cyprus, and entered into force on 1 January 2002. On 30 May 2002, Cyprus submitted its application to join the Treaty, which was rejected because of Turkey's veto, despite the agreement of all the other member-states. The application of Cyprus remains on the agenda, because there was no unanimity for its rejection and the consultations will continue until a decision is taken at the appropriate time. The observer status deprives Cyprus of the capability of active involvement and benefits from the Treaty, such as receiving Aerial Pictures. For Cyprus participation as an observer, the invitation by another involved party is required.

The main obligations of the Republic of Cyprus that arise from the above Treaty are as follows:

Demeaning of the Buffer Zone - The Republic of Cyprus, taking into consideration the important international effort for the restriction of use and proliferation of mines, and in accordance with the policy of the United Nations in this field, decided to submit a proposal to the United Nations for the demeaning of the buffer zone which is controlled by UNFICYP, in the hope that the Turkish side will respond to this proposal in the same way. Even though the Turkish side was negative towards this proposal, the Republic of Cyprus unilaterally studied and discussed the practical aspects of clearing its mine-fields in the buffer zone with UNFICYP and in cooperation with the United Nations. In the framework of these discussions, a team of experts from the United Nations visited Cyprus in June 2002. Once it studied the whole spectrum of demining issues this team returned to New York to produce a United Nations corresponding study which will suggest ways in which it will be possible to implement Cyprus proposal. It is noted that since 1983, the Republic of Cyprus has cleared 10 minefields near the buffer zone and that during the last few years it has destroyed more than 11,000 mines of various types.