Cyprus, due to its small domestic market and the open nature of its economy, considers access to international markets as of utmost importance. As a result, trade has always been one of the main sectors of the Cyprus economy, contributing considerably to the economic growth of the island. During 2003 exports accounted for about 7% of the country's GDP. 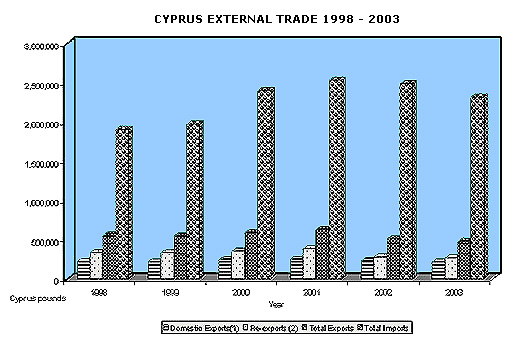 Geographical Origin of Imports - The European Union countries continued in 2003 to be the biggest suppliers of goods to Cyprus providing 55% of the total imports, or goods valued at CY 1.285 m. The major European Union countries exporting to Cyprus were Greece, Italy, the United Kingdom, Germany and France. The Asian countries were the second most important group of suppliers in 2003, supplying Cyprus with goods valued at CY 470 m. or 20% of the total. Japan, China, Israel, Thailand, Taiwan and Hong Kong were the most important suppliers.

Imports from other European countries, including the former socialist countries, represented in 2003 8% of total imports. They declined from the previous year, reaching CY 189 m., compared to CY 213 m. in 2002. The major supplier in this group was Russia followed by Ukraine and Switzerland. 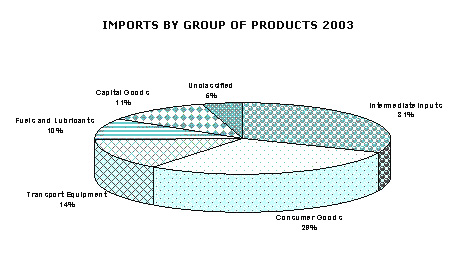 Imports from the Arab countries represent about 5% of Cyprus' total imports. They decreased to C£114 m. during 2003, from C£131 m. in 2002. Syria, the U.A.E., Egypt and Saudi Arabia were the major suppliers. Imports from the rest of the world account for 7% of the total imports. They declined to C£153 m. in 2003 compared to C£184 m. in 2002. Argentina, Brazil, South Africa, Australia and New Zealand are the most important suppliers in this group. (Table 3)

Domestic Exports - During 2003 domestic exports (including supplies to ships and aircraft) reached C£215 m. They have registered a decrease of about 7% from the previous year. 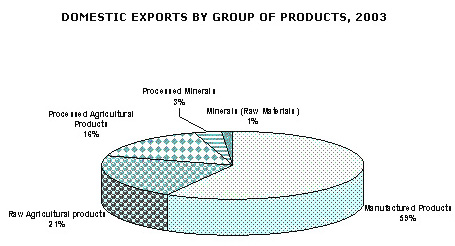 Geographical Destination of Exports - The European Union countries constitute the most important markets for Cyprus. In 2003 they absorbed 54%, or C£117 m. of Cyprus' domestic exports, compared to C£118 m. in 2002. The major E.U. export market for Cyprus products is the United Kingdom, followed by Greece and Germany and the Netherlands. The Arab Countries, the second most important group, absorbed during 2003 about 17% of Cyprus' exports. They decreased to C£36 m., from C£47 m. in the previous year. The major markets in this group are Jordan, Lebanon, the United Arab Emirates, Saudi Arabia, Kuwait and Egypt.

Exports to other European countries and mainly to Eastern European countries remained at about C£26 m. in 2003, representing about 12% of Cyprus' domestic exports. The major export markets are Russia, the Czech Republic, Romania, Albania, Slovakia, Bulgaria and Norway. Domestic exports to Asia represent 7% of the total declining to C£14 m. from C£16 m. in 2002. The major markets are Israel, Hong Kong and Malaysia. Exports to the rest of the world, with most important export market the U.S.A., declined from C£15 m. in 2002 to C£12 m. in 2003. Their share to the total was 6%. Ship stores of domestic produce declined from C£10 m. in 2002 to C£9 m. in 2003, representing 4% of the total domestic exports (Table 7).

Re-Exports - A significant share in foreign exchange earnings comes from re-exports, which in 2003 reached C£262 m. The bulk of these re-exports was directed mainly towards the countries of the European Union and the Arab countries. Re-exports to Central and Eastern European countries, as well as to Asian countries were also significant. A considerable amount was also directed to the U.S.A.

Promotion of Exports - The policy of the Ministry of Commerce, Industry and Tourism regarding the areas of trade and services aims at the expansion of exports of goods and services, through the continuous improvement of the competitiveness of the Cypriot enterprises and their ability to penetrate into new markets.

The Department of Trade is responsible for the adoption of the government policy regarding the development and promotion of Cyprus exports. Through its various sections and units, the Department provides appropriate support to the Cypriot manufacturers/exporters. This support includes the introduction of export oriented schemes, the participation in international trade fairs, the organization of business missions and seminars abroad, advertising and market research.

The Ministry operates also twelve Trade Centers, situated in carefully targeted markets. At present, the Ministry maintains centers in Austria, the Czech Republic, Egypt, France, Germany, Greece, Israel, the Russian Federation, Sweden, the United Arab Emirates, the United Kingdom, and the U.S.A. Their sole responsibility is the promotion of exports of goods and services.

The aim of the Department is to keep Cyprus economy timely and correctly informed about the status of commercial organizations. This aim is accomplished by providing correct and timely information for the structure of registered businesses and their financial status. The Department offers services of the outmost importance, especially to the commercial and financial sector of the economy. It also plays a principal role in the protection of Intellectual Property in Cyprus. It encourages the creation of original works in all fields of Intellectual Property by making sure that Cyprus Intellectual Property Legislation is kept up to date with European developments.

The goals and activities of the Department are split into three sections:

Companies Section - The Companies Section deals with the registration, follow up, control and striking off of companies (including offshore companies), of overseas companies, of partnerships and of business names. The Section advances, supports and facilitates the commercial transactions in all fields of the economy.

Copyright and Industrial Property Section - The Trade Marks Law (Cap. 268) together with the Paris Convention for the Protection of Industrial Property (Laws 63/65 and 66/83 Paris Union) offer equal protection to trade marks of Cypriot proprietors and of foreign proprietors. According to these legislations there is no distinction between domestic and foreign marks in the way they are treated by the Registrar. In 2003, 4.593 applications were filed with the Registrar for the registration of trade marks and service marks. 684 of these originated from Cypriot nationals (15% approximately) and the remaining 3.909 from foreign nationals.

Copyright in Cyprus is automatic and no registration is necessary. The Copyright Law (L.59/76) protects Cypriot nationals for their published works as well as foreign nationals for their works which are published in Cyprus. Only the Copyright owners have the exclusive right to reproduce, translate and offer their works to the public. Anyone who infringes their rights is liable to payment of damages and to other penalties according to the Law.

Cyprus State Fairs Authority - The Cyprus State Fairs Authority is a semi-government public organization governed by a nine member Board of Directors appointed by the Council of Ministers. Its terms of reference are the organization and promotion of general and specialized fairs and exhibitions and other events related to the promotion of trade and industry for the benefit of the economy in general. The Authority has established and owns an Exhibition and Convention Centre on the outskirts of Nicosia, which operates in a close collaboration with government services and other Authorities, notably the Ministry of Commerce, Industry and Tourism, the Cyprus Chamber of Commerce and Industry, the Employers and Industrialists Federation and other trade and business groups. The centre covers 42.000 sq. m. of exhibition space of which 30.000 sq. m. is indoor and 12.000 sq. m. is outdoor. Ten large halls and a number of smaller ones, serving special occasions, are at the disposal of the exhibitors for presenting and displaying their products. The Authority often offers its halls for hire to other event organizers.

Cyprus International Conference Centre - Since 1988, the Cyprus International Conference Centre supports the overall development of economic and social activity in Cyprus and contributes to the communication between people and the quality of life in the capital, through the conferences, seminars, exhibitions and fairs organized at its premises. The Centre has very comfortable and functioning spaces, indoors and outdoors. It combines technological superiority with the excellence of its services. It possesses superior radio, visual broadcasting and translation equipment. It contributes to the projection of Nicosia as a conference destination, takes part in exhibitions and makes all necessary actions for the promotion of Cyprus as a meeting destination.